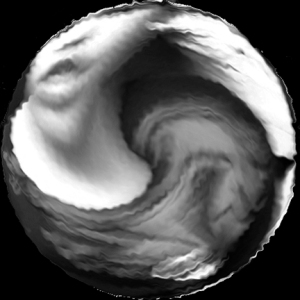 I spent Spring break in Tijuana, Mexico, where I discovered the secret of true happiness while losing my marbles. The first thing I learned, however, was that the weather in Mexico is vastly dissimilar from the cool, high desert climate of Washington State where I had been raised. The heavy gray clouds clung low in the air, blocking the sun out while trapping its heat in. Hot moisture permeated the air, creating an environment in which the sweat on my skin could never fully evaporate. Working in the heat made my eighteen-year-old arms ache and my legs weak. I needed a break from digging in the hard clay soil to rehydrate myself.

I took a moment to enjoy the scenery around me. Lush green hills rolled out far into the distance, their natural beauty marred frequently by large piles of trash and debris that flowed down their sides. From my vantage point near the very top of the hill, I could see the natural beauty of the Mexican landscape intermingled with the debris of the city, spreading out below me for miles. It was as beautiful here as it was dirty. The people who lived in this area were humble; their homes were dirt-floor shacks, no bigger than my living room back home. The hillsides were covered with zig-zagging rows of the tiny dwellings, most of them made from stucco, wooden pallets, or even tires.
I finished my bottle of water and headed back to my task, digging into the ground so the workers could lay a proper cement floor for the house we were building. I had come to this place as a volunteer, giving up my spring break to spend a week building houses for these poor people. When we were done, several families would be living in much better conditions than most of their neighborhood. In an area where entire families shared a single one room home that meant many people were going to have their lives changed this week, which gave everyone on my crew something to be proud of. We were changing lives, we told ourselves. These people would be much happier once they had nicer things.

“Look at those kids!” my friend Kadie exclaimed, pointing behind me. I looked around, and easily found what had caught her attention. Less than ten yards away from our work site, four small boys were struggling to pull a rather large car hood down the dirt road. As we watched, the boys slowly dragged the rust-covered hunk of metal down the sloping earthen street. Freshly cut grooves in the road marked the path of their struggle, indicating the sheer weight of the worn out auto part. Abruptly, the children stopped mid-stride. Amidst a lively chorus of small voices chattering wildly in Spanish, a loud “Thud” rang out as they dropped the hood onto the resting place they’d spontaneously chosen. Before my eyes, the children scrambled onto the hood, where they all sat cross legged in a circle.

“What do you think they’re doing?” Kadie asked.

“Beats me,” I replied, still unable to take my eyes off the children, all of whom were smiling and laughing with unbridled joy. The sound of shovels banging against dirt emanating from the work crew slowly faded away as I became more and more fascinated with the scene unfolding a few yards away. Four little boys, who owned no possessions to speak of, and lived every day in a level of poverty I could never begin to fathom, were now doing something that seemed completely out of place for these surroundings: they were enthusiastically enjoying themselves. My arms mindlessly shoveled heaps of dirt into a wheelbarrow as I allowed my thoughts to wander.

“How could they be so happy? They’re playing on top of a filthy car hood in the middle of the most poverty-stricken neighborhood I’ve ever seen…. and I grew up in a trash-encrusted trailer park!” I thought silently to myself. I continued to watch them play merrily with each other all afternoon, eventually satisfying my curiosity by discovering they were engrossed in a game of marbles. As I walked past their makeshift play area, only half busy in my work, a smile was never far from my lips as I absorbed their cheerful banter, high pitched, rapid Spanish conversations, and the occasional sight of a small boy toppling off the car hood in a fit of laughter.

Later that evening, lying awake on my cot back at the camping site that had become my makeshift home for the week, I thought of those boys. Their excitement, their laughter, their pure enjoyment of a simple game of marbles in the middle of a dirt road made me wonder about my own happiness. I grew up poor, but that was by the standards of my own country, I concluded. Compared to the people I was now surrounded by, I was very wealthy! Having access to clean water on a regular basis was a luxury in this place, I realized. By all accounts, I should be much happier with my life then these impoverished people, it would stand to reason. Yet, I wasn’t. I hated my life, nothing made me happy, and I had already spent many years blaming my inner despair on my living situation. I had decided long ago that I would never find true happiness until I was an adult, had moved out of the trailer park and gone on to make lots and lots of money. Whether I had convinced myself of this fact based entirely on my own principals or whether it was subconscious societal conditioning, I will never truly know. One thing was for certain, however: those four boys made me question my whole concept of the origins of true happiness.

The next morning, I searched my purse, hoping to find a few forgotten pesos so I could buy myself a snack. There was no money. Instead, I found something I had never given much thought to before: A marble. It had been rolling around in my purse for several months now and had been lying ignored by a curbside before that. A simple object that I had been carrying around, even though it held no real value to me before today. I stuffed it into the pocket of my jeans and smiled brightly, determined to do something I would never have imagined myself doing before that day. Until that point, I had never enjoyed anything in my life, ever, as much as those boys enjoyed their marbles. I wanted to feel that way. I wanted to play marbles then more than anything else in the world. I played several games with those boys every day for the rest of my stay in Mexico. They were quick to point out how awful I was at it, and I had to purchase a small bag of the colorful glass orbs from a local store long before the week was over. To this day, however, I’ve never enjoyed losing my marbles as much as I did during that week in Tijuana.

Bio
Ann Phelps is currently a single mother of three amazing children, two of which are teenage boys. When she isn’t busy hunting down misplaced shoes or engaging in impromptu Nerf gun wars, Ann is a full-time student at Blue Mountian Community College in Pendleton, Oregon.