Damara Lopez-Nelson, “The Day It Rained.”

The Day It Rained 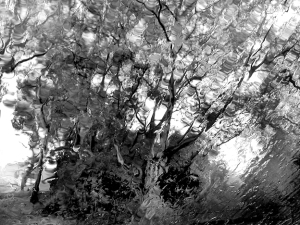 I was soaked to the bone the day I tried to run away to San Francisco. Once I got onto the bus, I took off my shoes and propped my feet up against the warm air vent to dry my socks out as much as possible; it would be no good to set out in a cold city as a wet rat. I wore one of my favorite pairs, the green socks with the triceratops and tricycles for good luck and bravery. But as I warmed up, I shivered (not from the cold) and let my mind drift towards everything that had led me to this moment. Alone with nothing but a bag of my most precious belongings and a copy of the train schedule. Among other items of importance, I had brought with me four notebooks, The Picture of Dorian Gray, a guitar pick, a fake green flower, a wind-up ladybug, a hand-written card from my sister, a packet of sage seeds, worry dolls in a dreamcatcher pouch, an empty glass jar, tape and a pair of safety scissors. In other words, everything I would need to start my hardened life as a runaway.

We passed the city limit, and I remembered myself on another runaway attempt, out on the freeway, wetter than I was right now, trudging through the rain, muddy and cold. I remembered how scared I had been when that truck had rolled ahead of me, parking on the shoulder. I saw Kate, the stranger I hadn’t known yet, jump out into the rain to offer me a ride. I had taken it dubiously; she had looked innocent enough but I had been afraid. She hadn’t judged me though, and when she had dropped me off in Santa Maria, she had wished me luck. Kate had shown me kindness; I silently wished her luck too.

An hour passed on the bus to San Francisco. My eyes raked over the painted backs of hills, hunched and pained. They looked beautifully broken, bodies of land bowed in defeat. My heart ached with anxiety and excitement to not see those hills again for a very long time. The bus entered Santa Maria. My breath twisted painfully when we passed it－that small part of the freeway where I had gotten arrested. I looked away, sickened. This was my new start, I thought to myself. My way to start clean.

Quietly I reenacted the arrest in my head. I’m the only person I know who’s been arrested for lying about their name. I told the cop my name was Sally. If I close my eyes I can still feel it. My fear, my paranoia. The unfairness of it all. The handcuffs on my wrists hadn’t felt as alien as I had thought they would have. Their weight clinked against my skin like bracelets, almost alarmingly normal. The surreal nature of my situation didn’t fully hit until I was led into the Santa Maria Juvenile Hall. It’s all there－a permanent fixture in the back of my mind. Being asked to strip, peeling off my rain-soaked clothes, feeling the exposure of my scars, fresh enough that the scabs stuck out against my skin. Being asked if I had any STDS, if I ever smoked, did drugs, overdosed. Answering yes, I overdosed last March. The shame of it all. The embarrassment. Getting fingerprinted, having that feel like a brand, an attachment to the end of my name that said “criminal.” All for lying about my name. More shame. Grief and a narcissistic mourning for all my wasted potential. The guilt. And then, for the weeks and months following, weak knees and melted fear in my stomach every time a cop passed. A “please don’t see the guilt in my eyes” every time a friend asked where I had been for the past few days. It was never as simple as to say “jail.”

I let the jail cell in Santa Maria leave my thoughts and allowed myself to enter the rain-kissed skies and muddy fields of Girsh Park on the day I overdosed. It had been around midday, no more than six hours after I had taken the first twelve pills. I had let my body rest against the fence, pliant and comfortable despite the rain, my eyes falling closed. In my drug-induced fever, I had sensed people gathering around me, immaterial and real at the same time. It was nice, felt safe. The first to come had been my mom and sister to hold my hands. Their warmth had spread through me until I could feel their love become a part of me. The next to visit me had been friends, Breshae mostly, I think. She had been worried, I could tell without looking at her, it had been hidden underneath her disapproval. I had tried to tell her, tried to explain to her what had happened, why I did it. But I couldn’t. Breshae left. For the briefest of instants, or perhaps he had been there the whole time, my dad came forward. We hadn’t really talked. He had been dead for too long, gone for too much of my life for him to have any say during this now.

Just like I can still feel the handcuffs, I can feel the cold chain of the fence; my fingers lacing through it in some desperate attempt to keep me anchored to land. To keep me from being swallowed by the sky like my dad.

Maybe an hour after I left Girsh Park I had swallowed down the other eighteen. Thirty pills in all. To this day I can’t articulate why.

On the bus to San Francisco, I breathed out a long sigh. There were only three of us on it. I was glad. There was a guy seated in the front who got on in Santa Barbara like I did, and I felt a strange degree of closeness to him. He was heading to the bay area too, Oakland. When the cops stopped our bus in Salinas, I couldn’t help but wonder what he thought of me as I was escorted off. Apparently I wasn’t as ready for the runaway life as I thought. I left an obvious trail in my wake and, once my family realized I was missing, it didn’t take long for them to find out what I was doing and where I was going.

When they put me in the back of the police car, I desperately hoped I wasn’t going to be thrown into jail for this one. I wasn’t.

Instead the officers, grudgingly likable, kept me in a small room at their police station until my mom and sister could take me back home. They even let me keep my bag.

However, while I was waiting, I couldn’t avoid my grief. I had run away in the hopes of stopping the perceived inevitability of my own death. With each passing day it had become harder and harder to balance the tightrope of my sanity. It would’ve only been a matter of time before I would’ve fallen off. Figuring I’d be dead by the end of junior year if I didn’t do something, I thought that leaving would be the only way to save myself. Now being faced with the immediacy of home, I was already beginning to feel the chill of dying. I cradled my fear in my stomach, willing it to not show on my face. I tried not to think about how close I’d already come.

That time at Albertson’s, alone. Clammy hands carefully peeling back the cardboard flap on a box of Tylenol, my poisonous crux, before slowly putting it back and leaving with a dizzy, tight feeling in my throat. I thought of all my days spent at Girsh Park, my launching pad for every suicidal fantasy. And the time I was really going to do it. If Mr. Cruz hadn’t found me, I don’t know what would have happened. I never really thanked him for stepping in, and I still don’t know how to bring it up.

I closed my eyes, and went to the bluffs of Isla Vista. How I liked to walk to them and not think. The comforting solidarity of the wind and water, smashing together like two middle schoolers kissing for the first time. The water coming up from the rocks, showering me in a kind of reverse rain.

I brought myself back to the police station. I leaned back and saw my sister’s face adorned with large, wet brown eyes. Her normally loud voice dragged down to a whisper, saying “What are we going to do now?” I closed my eyes and felt the heat from the sun hit the back of my neck and heard my best friend say, “I don’t make friends with dead people.” She was right. It wasn’t fair. Then I was sitting down, subtle surges of guilt waving in. Mr. Cruz, quiet and serious and concerned, saying “What can I do?”

I felt the crack, crack, smack of my fists hitting the beautiful ridgework of bark stretching over the trees lining the way to school, the swollen bruised knuckles that ached to the touch days after. The vulnerability I felt deep in my chest when I had told my friend one day about the pills. Her sudden, unexpected sincerity, her “I’m sorry.”

The memories rolled around my head like loose pieces of a board game still trapped in the box. When my mom and sister arrived, I regarded the moment as the curtain call on my last attempt at living.

Weeks after Salinas, I left when it was raining. Like I had done so many times before, I made my way by foot to Girsh Park, taking my time, savoring the water coming down. When I made it to the fence, I took extra care to sit as close as possible to the spot where I had been during the overdose. I stayed for a long time, letting the grass stain my jeans, feeling the fence stick uncomfortably against my back while I listened to The Front Bottoms. Quietly, though there was no one else around to hear me anyways, I began to sing along, “Still I scrub and scrub till my body bleeds, convince myself I am coming clean. Forget and ignore who I used to be, that kid is never coming back….” I trailed off. Tomorrow was the last day of school. I had made it to the end of my junior year. I let the rain soak me to the bone.

Bio
Damara Lopez-Nelson is a seventeen-year-old dual enrollment high school student who attends three schools simultaneously, one of them being Santa Barbara City College. She stays involved in her community through social justice work and soon plans on finishing the book she’s been writing for most of her life.